skip to main | skip to sidebar

Hindi cannot boast of many poems set against a military backdrop. This poem, penned by Shailendra Shail who is now retired from the Indian Air Force after a career spanning 35 years, is one such poem. It is anthologized in his latest book of poems, Kavita Mein Sab Kuchh Sambhav (Antika Prakashan). A tentative English translation is pasted inline as well.

A BURNT-OUT AIRCRAFT AT DUSK

Hidden in the thicket of trees
the aircraft looked
like a dark demon at dusk.
It was not an aircraft, in fact
but mere ribs of it
left after the crash –
bare, hostile and scary
like a wounded vulture.

He knew
nobody had been there for years;
penetrating the shoulder-high wild grass
he walked closer.

He is quite a timid fellow
but a bizarre curiosity
had drawn him there
With his head lowered
he entered the portion
which must have been once the cockpit –
Here sat the pilot
here co-pilot
and here navigator:
the navigator
under whose burnt-out seat
was a bird nest –
three chicks
trying to open their eyes
the navigator had just got married.

On the half-burnt wing
had shot up a tree –
looked from the distance like the English neem;
the leaf was not bitter.
He thought of sending a leaf to Salim Ali
and asking the tree's name –
then he remembered
Salim Ali was an expert on birds
not trees.

He was engrossed in this thought
when his foot struck something solid.
An army water bottle
as it is
despite a burnt-out outer felt.
He brought it home
as a memento.

on the way back he thought
displaying it on a fine stand
he would impress his friends
and tell him about the navigator
who had just got married
and the chicks
who under his burnt-out seat
were trying to open
their eyes.
...

Translated from the Hindi by Samartha Vashishtha 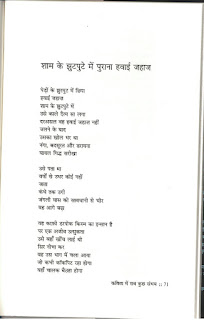 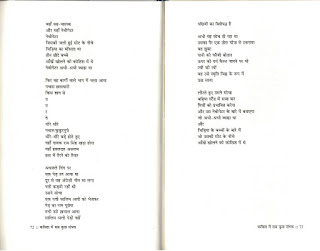 "Where you have city squares
and unhappy students
you will eventually have tanks."

The troops will come in then,
recruits still in their teens,
proud of their uniforms.
They march so stiffly
they will be a tired lot
before they even reach the square.

They've been given pep talks,
even as they set out from the barracks.
"You'll get a few hoodlums there,
foreign agents mostly;
throw them out!"

But they get waylaid.
People start running alongside
these marching squares.
When people turn emotional
even cliches make sense.
"You are flesh of our flesh,
blood of our blood," they shout
"You can't fire at us!"

Loudspeakers start howling
like wolf-packs at each other.
The Party loudspeakers
give endless renditions of the martial law,
and read out tear jerking letters
from the mothers of the students
exhorting them to read
the key speeches of the Great Helmsman.

There will be vigils now and rumours:
such and such an army has left the barracks.
Helicopters have left a particular air base.
Cobbled on the pavements,
with the night as blanket,
the students go to sleep.

Next morning, if that's the word
for night cut up in half
by tracer bullets,
come the tanks.
Where you have city squares
and unhappy students
you will eventually have tanks.